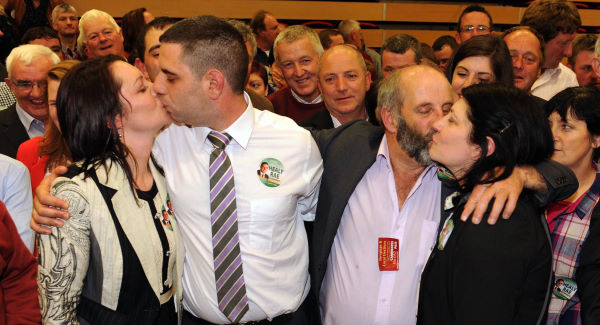 RECENTLY elected politicians have been winding down their relationship with the outside world today after a successful local election campaign over the weekend.

Nine hundred and forty nine representatives will say goodbye to their voters for another five years, with many hoping to do as little as humanly possible on their €28,750 a year part-time salary.

“It’s all over now bar the shouting.” said successful Kerry candidate Danny Healy-Rae. “What a perfect time of year for an election too. People will have forgotten who they voted for in September. I’ll be turning off me phone for a while I think. I might even hire a Jobs bridge secretary as a go between if people start bothering me.”

Councillors up and down the country were said to be in high spirits yesterday after news came of their new appointments, with many celebrating into the small hours of the night.

“It’s like winning the lottery I suppose.” explained one Fianna Fail Councillor, who was clutching a bottle of bucks-fizz. “We’ll get thirty K a year for the next five years, and not to mention expenses too. It’s one day’s work a week, I can still run my other businesses. Delighted, I am.”

Minister for the Environment Phil Hogan said he was happy this years local elections, and said that his “scaling down” on local councils was a stunning success.

“Everyone was giving out about my cost cutting idea to join up councils.” he gloated.

However, Mr Hogan was taken aback when asked why there are actually 65 more Councillors now than there was in 2010 after his so-called “scale back”.

“Um, well, that’s only because…..am….that would be Fianna Fail’s doing.” he said. “Anyway, the more the better. Isn’t that what they say?”

Mr. Hogan then ran off shouting to his personal assistant for a calculator and a pen.