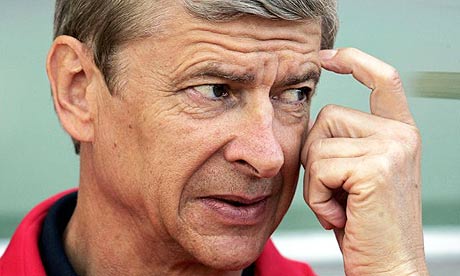 Arsene Wenger was besieged with questions about Arsenal’s prospective transfer targets in the build up to this evening’s crunch European tie against Fenerbahce.

As he resolutely defended his record on nourishing young talent Wenger made an astonishing admission. The Frenchman, 63, has chrometophobia otherwise known as a fear of money.

Despite obtaining a degree in economics, the under pressure gunners boss has long struggled to engage with money on a physical and philosophical level.

Visibly uneasy at discussing his fear Wenger pleaded for understanding.

“In the past it was so much easier, such small sums. People say £10 million, ugh, is too little…I vomited after sending such a huge offer to Newscastle. I had night terrors.”

Chrometophobia is believed to effect 1 in every 1 million people with the Arsenal manager perhaps its most famous sufferer.

“I try to barter for most things but it is not easy,” admitted Wenger, “have you tried exchanging Bendtner for anything recently? He doesn’t even cover the weekly shop”.

“Do you know that when I bought Freddie Ljunberg he cost 3…3…3 million pounds.

After, I was so troubled I stayed in bed for 5 days. How do you think I feel now that Spurs are looking for £100 million for Bale…sorry I’m going to be sick.”

Wenger left the packed press conference and was absent for several minutes. He tried to carry on with questions from the press but was easily startled by the sound of journalists rummaging around for change in their pockets.