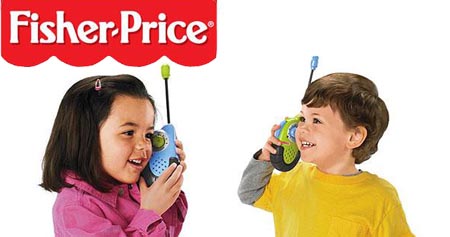 RENEWED CALLS have been made by a county Waterford couple today to ban fisher price walkie talkies following an ‘airwave bullying’ incident involving their two children.

The parents of 5-year-old Timmy Flynn, who was found crying in his bedroom last week, have asked people to sign a petition calling for the wireless devices to be banned.

Gerry and Mary Flynn, acted after their older son Derek called his younger brother a ‘stupid shitbag cunt’ while using the device, and continued bullying the child on the walkie talkie for several minutes before the batteries ran out.

“All I could hear was poor Timmy sobbing in his room.” said Mrs. Flynn. “I had no idea they could use these devices for such horrible means.”

“Who knows how long it has been going on for.” she added.

It is understood that the walkie talkies used were bought by a friend of the family in a local smiths toystore in the city.

“The vulgarity of the language used on the walkie talkies is absolutley disgraceful.” said father of the two innocent boys, Gerry Flynn.

“I just hope we can warn other parents of the potential dangers associated with using walkie talkies.”

This is the first reported incident of ‘airwave bullying’ recorded in Waterford, leading to some serious concerns with other such forms of communication.

Last year in the rural village of Portlaw, one child was treated for shock after being called a ‘right so and so’ by a friend.

It is believed the pair were using a ‘tin can telephone’ at the time, which was made using some string and two topless tin cans.

The communication system was later banned by the village mayor in May.