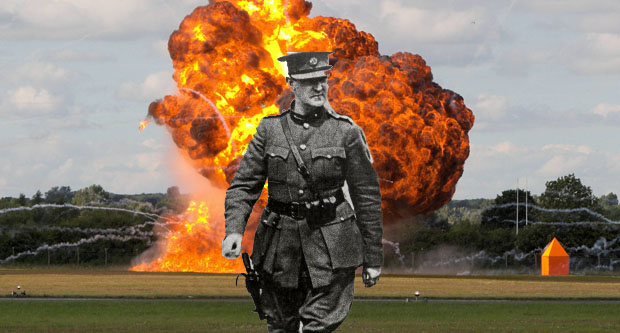 DEADLINE Hollywood is reporting that American film director Michael Bay is prepping a ‘dramatic reimagining’ of the 1916 Easter Rebellion, which was mounted by Irish Republicans with the aim of ending British rule in Ireland.

With his latest, Transformers: Age of Extinction, in the can Bay is reportedly excited to ‘do to the 1916 Rising what I did to Pearl Harbour’.

Michael Bay is one of the most successful filmmakers of all time with his movies grossing over 3 billion dollars worldwide at the box office. Bay specialises in high budget action films and this latest will no doubt be characterised by heavy use of CGI, fast edits and racial stereotyping.

A press release from Bay’s representatives describes the plot as devised by superstar screenwriters Alex Kurtzman and Roberto Orci;

“Patrick Pearse, James Connolly and Joseph Plunkett are three roguish best friends who run an orphanage in the countryside trying to stay out of the way of the British Empire under the rule of the malevolent King James. However, when the beautiful and mysterious freedom fighter Countess Markievicz turns up seeking shelter, the three men’s loyalties are tested to each other and their country.”

The movie is slated for July 2015 release and filming is set to take place in Hungary this summer.