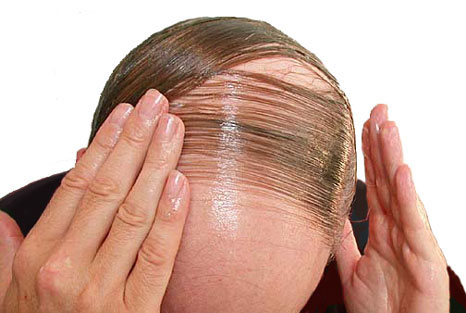 There were tense scenes today in the offices of Barnes Management Solutions as owner of the company Barry Barnes unveiled his new comb over to staff.

In a muted showcase for his new hairstyle, the quite obviously balding 46-year-old, walked through the open plan offices to the staff kitchen without drawing attention to the straggles of hair stretched across his shiny dome.

A number employees found their eyes drawn to the unsettling hairdo with one employee, Karen, even letting out a shrill cry of anguish when first catching sight of Barry.

Following this dramatic entrance, the office became a hive of activity. Emails were exchanged at a fast pace. “So, are we supposed to pretend like nothing has happened?” remarked Karen in an email to her colleague Martin. “I think it’s basically like a who blinks first situation. We can’t mention it because then that’s awkward, isn’t it?” Martin fired back.

“Lads, I can’t do this. I’m going to quit. I am going to bloody quit. This is ridiculous. He is bald. He knows it. I know it and I’m just supposed to pretend he’s not?” Shouted distraught sales executive Michael across the office while Barry was in the bathroom.

Several employees made the signal for a smoke break and convened outside to discuss the morning’s disturbing events.

“How does it even work? Has he like, grown his hair long on one side, yeah and like now he’s flipped it onto to the other side?” queried concerned sales manager Joe.

“Stop! Stop talking about it, just thinking about it makes me sick,” interrupted a visibly shaken Sharon.

HR manager Louise was inundated with requests from employees seeking a suitable end to the developing situation.

In an email for staff only Louise stated that “it is a very sensitive situation and I’m finding nothing in my conflict resolution books about comb overs so best to ignore it and carry on as normal”.

Barry, meanwhile was a picture of confusion as he interacted with staff who were reluctant to look in the general direction of his head.