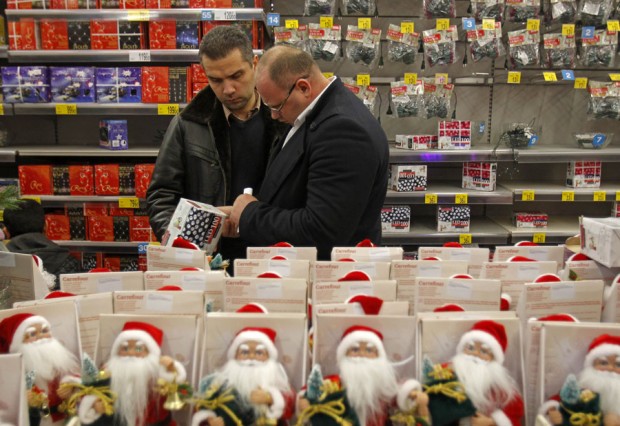 EAGER retailers have welcomed the sight of thousands of husbands arriving at shopping centres across the country today as they begin their annual last minute dash for whatever shite is left on the shelves, WWN can reveal.

While some 80% of husbands will actually leave it until 4pm tomorrow to begin shopping, they could well find that the assortment of shite left on the shelves is significantly reduced thanks to the early bird husbands currently foraging for presents.

“We’ve actually emptied our bins out onto the shelves as of 11am today, as we know husbands traditionally begin to arrive at this time,” explained retailed Martin Cunningham, “our first husband of the day bought a half-eaten sandwich, said it was perfect for the missus”.

Husbands, famed for their inability to take heed of the Christmas present hints dropped by their wives as early as July, were more upbeat about their prospects.

“Ah, there are still some great bargains out there,” explained husband David Rogan, “I’m not into this mad rush in November getting everything sorted,” added the man who will shortly purchase a paint brush for his wife Ainé, who has no interest in such things.

Retailers have taken to capitalise on the yearly event which has now become part of the Christmas experience for almost all shoppers.

“We now sell tickets in the shop so people can watch husbands come in and panic buy something ridiculous. We’ve actually put in 40 seats there behind the tills,” explained shop owner Orla Cashin, “the VIP tickets allow you a seat right next to the register so you can observe a man purchasing something entirely inappropriate while he wears the expression of someone who has cured cancer”.

Up to the minute surveying of husbands shopping revealed that only 1 in every 50 of them were shopping with a pronounced sense of fear and panic.

“Jesus, the amount of stress some people go through is ridiculous, sure just take a leaf out of our book – hassle free, in and out in 10 minutes. Done,” offered Dublin husbands Cormac Lyons as he loaded a 12 foot marble statue of a goat giving birth to Dáithí Ó Sé onto the roof of his car.