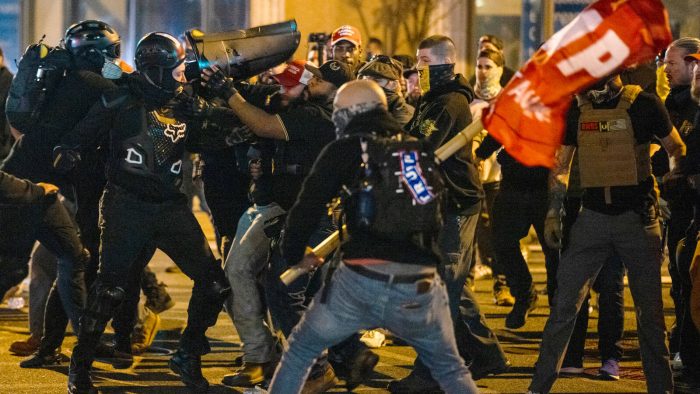 ONGOING protests surrounding the result of the US presidential election resulted in a surprisingly small number of injuries yesterday, after clashes between Antifa and the Proud Boys turned out to be downright civilised compared to what had been expected.

The Proud Boys, an anti anti-fascist organisation who are somehow not fascists, clashed with pro-Biden supporters in Washington DC yesterday resulting in four stabbings and one gunshot wound, described as ‘not bad going’ considering the level of hate on display on the streets.

“We were expecting much worse to be honest, particularly with how the president has been telling these lads to pretty much run riot for months” said one onlooker, referring to Trump’s ‘stand back, stand by’ instruction to the Proud Boys in the lead-up to his loss in the presidential election.

“The president’s lads come armed for war, so you might expect people getting shot and killed by the dozen, particularly as the cops cannot act against their ‘protect angry white people’ programming” added a Washington paramedic, who wasn’t as busy last night as he’d expected.

Meanwhile, outgoing president Donald Trump has continued to call into question the victory of Joe Biden, with constant tweets about how his supporters should help him ‘stop the steal’.

“You’ll notice the ‘LAW AND ORDER!!’ tweets have kinda dried up” mused one political correspondent in Washington, while wondering if they could get a safer assignment in the Helmand province before it all really kicks off as inauguration day draws closer.