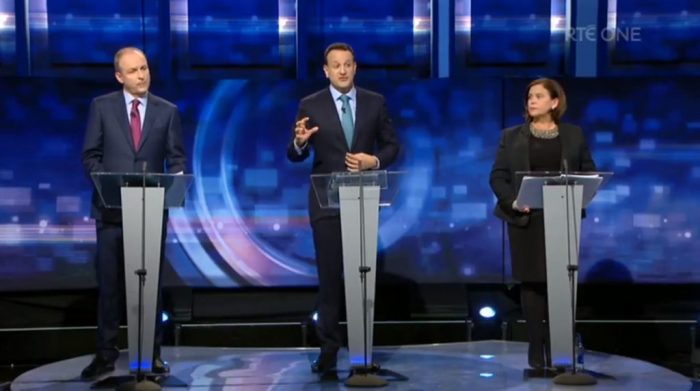 AS stop-start government formation talks between Irish political parties trudge on, the Irish nation has been seen fidgeting and tapping on its watch before reminding politicians it hasn’t got all fucking day.

“We’ve shit to be doing, so are we governmenting or are we election 2.0-ing?” an irritated Irish public relayed to Sinn Féin, Fianna Fáil and Fine Gael, reminding them that the time since the 8th of February election measures as ‘forever-a-fucking-ago’ in Irish time.

Corralling the party leaders together like parents trying to resolve a fight between squabbling children, the nation insisted they quit their messing and get on with it while also telling smaller parties to stop acting like they’ve a real say in any of this.

“Zip it,” added the Irish public as McDonald, Martin and Varadkar attempted to begin the latest round of the blame game. “Just quit your moaning and sort it, the lot of yiz have our blood pressure up the wall ‘she’s in the RA’ this, ‘he’s a Tory boy’ that, ‘Micheál looks like an even more sinister Mr. Burns'”.

Though growing tired of the charade of party leaders trying to take hold of the post-election narrative, the nation acknowledged its own part in the frustrating squabbles that pass for negotiations.

“This isn’t all on you, we clearly don’t know what we want but still expect you to make everyone happy. But seriously, we’ve got the attention span of a concussed fly, another few days of this and we’ll forget who we’re supposed to be angry at and we’ll be calling you all a shower of blaggarding pricks. You’ve been warned”.

The nation concluded that by the time it gets the washing done, puts the bins out and gets back from collecting the youngest from football training it expects a government to be sorted, or else.