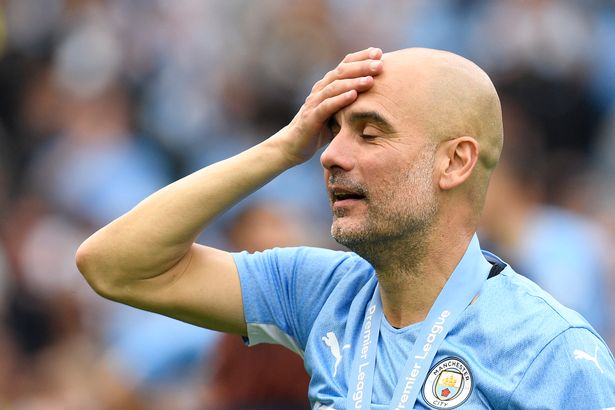 “IT’S the hope that kills you, no?” Man City manager Pep Guardiola said in the wake of his side’s manic 3-2 win over Aston Villa while admitting momentarily shitting the bed was always part of the plan just to heap extra misery on his rivals.

Performing a quadruple bypass on Liverpool, Guardiola confirmed that it had been his intention to toy with the emotions of Liverpool fans before crushing their spirits into dust to be snorted by Man City fans invading the pitch to celebrate winning the title.

“You really think I’d play a 37-year-old Fernandinho, who’s slower than a tortoise in quick drying cement, in defence for any other reason? You think letting Coutinho of all people score was a coincidence? C’mon on,” added a gleeful Guardiola.

Despite the final day being more drama filled than a Corrie/Eastenders crossover Christmas special, Guardiola has insisted that his team were merely teasing Liverpool fans and never actually at risk of bottling it.

“I’ll usually more stressed than a death row inmate on execution day but I’ll drift off to sleep easily tonight to the soundtrack of Liverpool fans celebrating us going 2-0 down,” the Spaniard added.

Elsewhere, the Premier League refused to condemn Man City fan’s who ran on the pitch and destroyed their goalposts as with the signing of Erling Haaland there really is no need to even bother with the league next year.

Meanwhile, Man City and Liverpool fans were urged to take a moment out of their era-defining rivalry to enjoy Manchester United losing to Crystal Palace 1-0 and it not even being news.