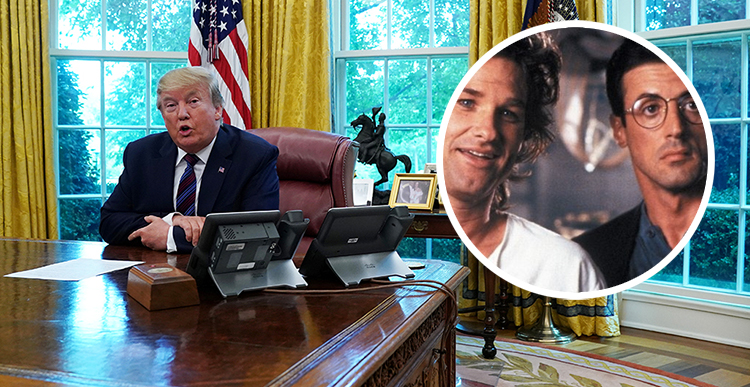 “BIDEN and Harris, Harris and Biden” fumed Donald Trump in the back of a stretch limo, driving away from the scene of another opinion poll which saw the Democratic pair make even more ground on their quest to break up his empire.

“If it’s not Biden it’s Harris, if it’s not Harris it’s Biden. These two are driving me crazy. We… have to do something about this. If we kill them, we risk all-out war with the left; they’re heroes already, why make martyrs out of them? What we need are Biden and Harris… two rats in a cage”.

Trump went on to outline his plan to frame Biden for money-laundering and political impropriety in the Ukraine, before noticing his aides did not share his enthusiasm.

“Sir, it’s just that this sounds very like the plot for the action classic Tango & Cash, and you seem to have gone full Jack Palance” offered one aviator-shaded flunkie.

As debate raged in the Oval Office over whether or not the correct campaign strategy to win back thousands of fleeing voters would be to jail the Democratic nominees in a prison packed with people who hate them, Biden and Harris were busy making arrangements to bulldoze into the White House in a heavily armoured monster truck and ‘shoot the fuck out of the place’.