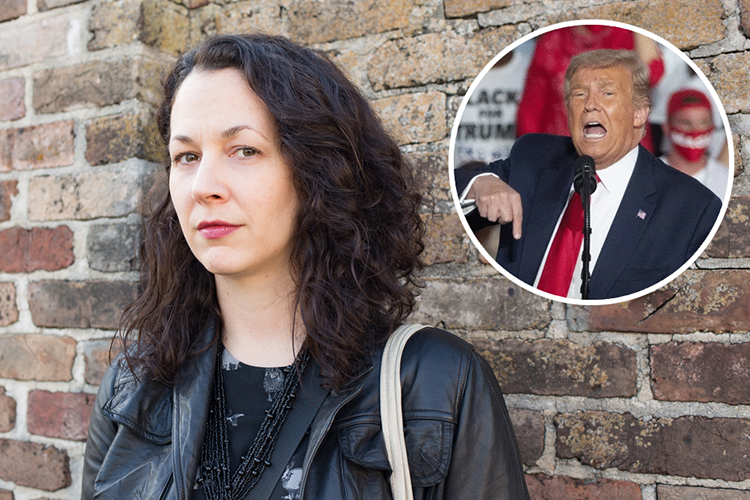 TRYING her best to sum up the intense, visceral disdain she has for US president Donald Trump, local woman Rebecca O’Brien confirmed she would rather give birth out her arsehole than ever look at that ‘obese oompa loompa prick’ again.

With coverage of Trump on news stations increasing as the 2020 US election date draws near, O’Brien has found herself shouting at the TV and cursing housemates for not being quick enough in turning off the TV when he appears on screen.

“I’d rather give birth out me hole to Kim Jong Un twice then look at the Infector-in-Chief here,” shared O’Brien, “honestly jam rusty nails up my toenails, hang cinder blocks from me nips, I never want to see The Jolly Orange Eejit again”.

“Look at the state of him there,” O’Brien observed reaching for the remote to switch off coverage of Trump hosting a large, mask-less, socially-glued-together rally in Florida, “I’ve seen portaloos at the World Curry Championships in better shape than him”.

Trump was last called ‘Trump’ in O’Brien’s household sometime in early 2017 with the 28-year-old preferring to call him ‘that dose’ among 946 other derogatory things, something O’Brien hopes can come to an end with ‘that Republi-cunt’ getting voted out by the Americans in November.

“Aw stop, I can’t. Honestly, I can’t be dealing with his fat face and that vagina neck thing he has going on. Makes me sick. I’d rather down a pint of me dog’s vomit than have to see him again,” added O’Brien, fed up t’fuck.

“And his fecking kids, talk about The Walking Imbred, the hack of them”.