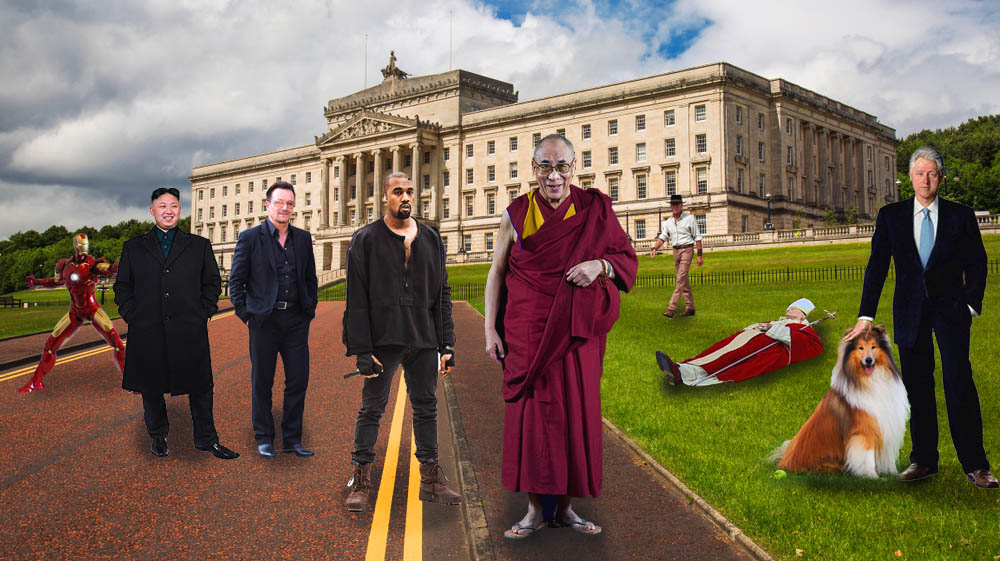 BOTH the UK and Ireland have pulled out all the stops in a last-ditch attempt to get the Northern Ireland Executive back up and running in Stormont today, by inviting along literally anyone they think will be able to talk some sense into Sinn Féin and the DUP and restore some form of power-sharing agreement for the first time in over a year.

Celebrities, deities, fictional characters and even the exhumed remains of deceased pontiffs have been bussing their way up to Stormont today, each chosen to appeal to a different facet of the political divide up north, after aides to Taoiseach Leo Varadkar and British PM Theresa May suggested that ‘getting Bill Clinton to have a word’ might be one way to break the deadlock between Unionists and Republicans.

With Clinton on board, the think-tank then decided to ‘throw the Dalai Lama and Bono in as well’, and before too long the list included notoriously stubborn North Korean despot Kim Jong-Un, who it is hoped will tell the DUP and Sinn Féin how unreasonable they’re being, and Crocodile Dundee actor Paul Hogan, who will try that finger-turning-humming thing that he uses to calm down animals on DUP leader Arlene Foster.

“They’ve got the remains of Pope JPII coming in, so that the Catholics won’t raise their voices, and then we’ve got Kanye West coming in because Unionists love Yeezy,” said WWN’s political correspondent Bobby Sans.

“They’ve got Robert Downey Jnr coming in dressed as Iron Man, and Lassie the dog too… I’m not sure why, but that’s just how the day was going. There’s invites out to Kofi Annan and Katy Perry, the lad with the moustache who got all burned in the Falklands War, Barry Scott from the Cillit Bang ads and the kids from that YouTube video where one bites the other’s finger. All of them will be telling both sides the same thing ‘ah here lads. Fucking sort it out'”.

So far, the debates have been going very well, with Val Kilmer offering insightful thoughts about the Irish language act, and Danger Mouse chiming in with an excellent take on marching season.