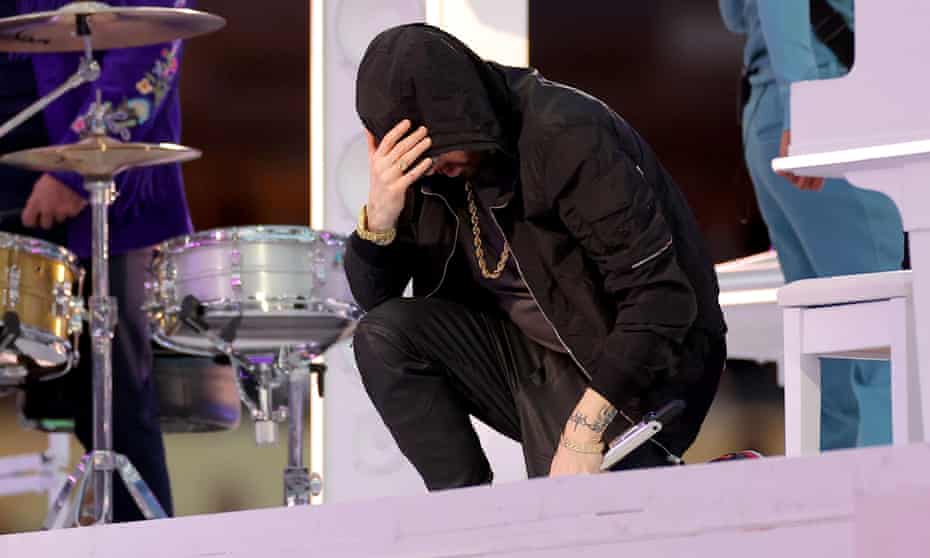 APOLOGISING for a misunderstanding as to why he was kneeling during his Super Bowl halftime performance yesterday, hip hop artist Eminem has shed some light on the incident, WWN can confirm.

“We were moving around a lot and my legs were aching like a motherfucker so I took a little break – I was just very tired,” the embarrassed 49-year-old explained amid debate which suggested it was a dig at the NFL, mimicking Colin Kaepernick’s 2016 protest against police brutality and racial injustice, “we’re all pushing on now and dancing around for more than ten minutes really takes its toll on the old knees caps, but yeah, if you want to take it as a big fuck you to the NFL and systemic racism, then cool, yo”.

Eminem, real name Marshall Mathers, joined mentor Dr Dre and a host of other ageing artists including Snoop Dogg, Mary J Blige and 50 Cent for the show, before all retiring to their trailers for a well-deserved rest.

“Dre had to go for a nap right after the show and 50 kept complaining about the loud noise from the stadium and kept goin’ on about how he’d rather be at home in his favourite chair watching the show instead of being in it,” Eminem added, now rubbing his sore knees, “we were all at home in bed by ten last night – I’ll sleep for a week after this”.

Sunday’s performance marked the first time hip-hop artists were the main performers for the halftime show, giving middle aged white America a thankfully brief glimpse of what it would actually feel like to be a multicultural society devoid of racial tensions.