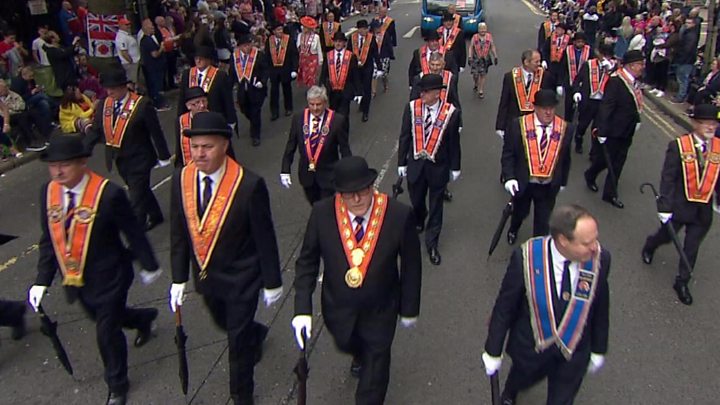 CERTAIN sections of Irish society have weighed up the senseless horror, death and economic vandalism wrought by the Covid-19 pandemic across the globe and concluded that it has been worth it after learning of the cancellation of the July 12th Orange Order marches.

Roused out of their depressed stupors, people have reportedly smiled and laughed the laugh of demented and delighted hyenas for the first time in weeks after learning that the restrictions on gatherings and social distancing have finally produced a positive result, forcing Unionists to issue a rare ‘Yes’ in order to comply with cancelling the marches.

“Do we have any footage of lads crying while putting their sashes, flags and banners into storage? Or just a picture of Arlene’s face? That’d be like mainlining happiness right now,” confirmed one person, feeling hope for the first since this outbreak hit.

It is believed that the marches could go ahead if the pandemic spread is slowed and lockdown restrictions are removed, prompting many non-Unionists in Northern Ireland to begin coughing on people nonstop, abandon all hand washing and confirming they’d have no problem with further curbing of freedoms so the lockdown could be extended indefinitely.

“Paddy’s Day was cancelled, and so what? We all know how to get pissed on cheap cans in our homes. That’s the magic of it. Marching though? Marching just to piss off other people? Marching and banging drums non-stop and dressing like an angry traffic cone? Ye can’t do much of that stuck in your own house, can ye?” added a beaming local Catholic, who finally had confirmation that humanity’s current suffering has all been worth it.