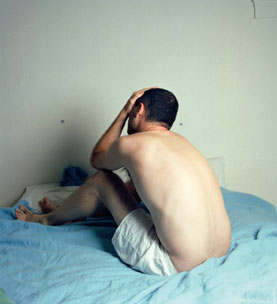 “Chris has locked himself in one of the upstairs bedrooms,” reported the agent. “He has the track ‘Trouble’ on loop, and no one can get in contact with him.

“Listening to Coldplay is probably the worst thing he could do right now.” he added.

The singer songwriter was said to be devastated after “uncoupling” with long time wife Gwyneth Paltrow. The pair have also announced they will be “unparenting” their two children, Moses, seven, and daughter Apple, nine, who will be given up for adoption later this month. Madonna and Angelina Jolie have already shown interest in the two children.

Thousands of Coldplay fans across the world have taken to social networking sites to voice their thoughts on the breakup. Rumours are already rife that the band may release an ‘undepressing’ album for once.

“Well, if Chris manages to pull himself together, excuse the pun, he might start writing happy songs.” said one fan today.

The former couple confirmed they were ending their ten year marriage via a statement on Gwyneth’s Goop website on Tuesday.

Meanwhile, in other entertainment news, Sinead O’Connor is expected to say something controversial quite soon.