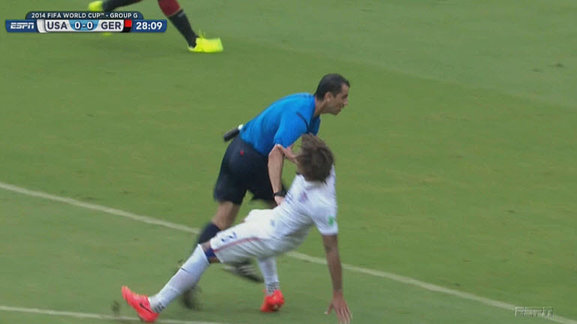 WWN brings you all the latest action from the World Cup in Brazil.

Last night saw the final group games take place and we now know the identity of the teams that have gone forward to the knock out stages, but much of the focus still remains of the cannibalistic tendencies of Luis Suarez.

The media have celebrated after reaching 1 million hours worth of coverage on the Suarez’s bite and ban saga while Eamon Dunphy made a passionate plea to Suarez last night offering his support, ‘He’s just a baby, baby’.

The USA secured their place in the last 16 despite losing to Germany 1-0. After the match attention turned to analysing replays which show USA midefielder Jermaine Jones being violently assaulted by the referee. It is believed the referee placed a large bet the previous day on a player being beaten up by an official.

Ghana’s World Cup ended in disarray following the sending home of two of their star players Sully Muntari and Kevin Prince Boateng. Unconfirmed reports suggest a row was sparked by management when they asked Boateng ‘Prince, really? That’s hardly a name now is it?’

It is at this point in the tournament that FIFA also throws in its usual ‘wild card’ nations to spice things up. Canada, Egypt, Zlatan Ibrahimovic and Scotland will randomly enter the field of play in several of the round of 16 games – turning the game from a traditional 11 v 11 to a 3-team chaos filled event. FIFA deny the reasons for keeping to this format has been prompted by an effort to gain the attention of the lucrative American market.

WWN cannot confirm that Sepp Blatter entered the hotel where the Ghanian team were staying yesterday afternoon and stole the $3 million bonuses they had recently received, paid in cash, from their FA. Blatter was later seen fleeing the scene via a rooftop helicopter.

There was controversy in the Alergia/Russia game after Russian goalkeeper Akinfeev seemed to be targeted by a laser pointer in the crowd. The subsequent corner taken by Algeria saw Akinfeev feebly wave his arms, missing the ball and conceding a goal.

There have been rumours circulating for some time that a state of the art laser pointer had been developed that can momentarily reduce a goalkeeper to a collection of poorly assembled limbs. FIFA have already begun an investigation into the matter.

Saturday sees Brazil take on Chile in a mouth watering tie. Brazil have been hard at work in training the last few days and a touching video appeared online which shows the entire squad try to teach striker Fred to walk, run and then finally kick a ball all by himself.

The later kick off sees in form Colombia take on a Suarez-less Uruguay. As many as 10,000 grief counsellors have descended on Uruguay in the aftermath of the Suarez ban as it seems the entire nation is still in the denial stage of the grieving process.