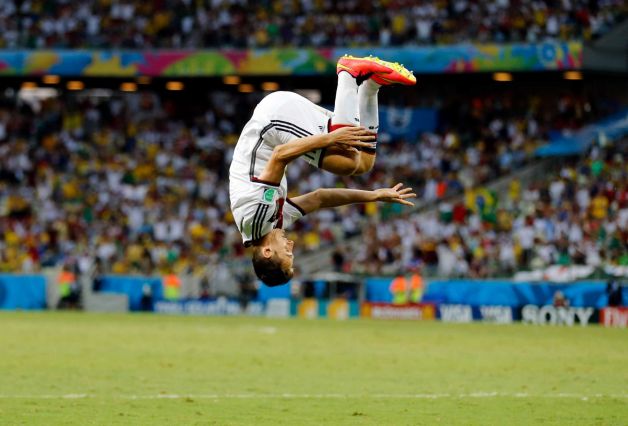 WWN brings you all the latest from the World Cup in Brazil.

Adrian Chiles finished in first place, just ahead of Hitler, in a fan poll of the most unlikeable men ever to grace the earth.

The aftermath of England’s World Cup failure has seen the media and fans alike finally settle on their scapegoat. Steven Gerrard has pipped Wayne Rooney to the coveted title of ‘it’s all your fault you complete bastard’. Gerrard will be flogged in Trafalgar Square in front of the Queen upon the team’s return.

Olympic gold medalist and best young player at Copa America 2007 Lionel Messi scored a 90th minute winner for Argentina against Iran yesterday – his second goal of the tournament and his 40th for his country. Messi has racked up 21 goals in his last 21 internationals but when will he produce the goods in the blue of Argentina? Conventional wisdom suggests 43 goals in a World Cup final against Brazil would go some way to silencing the critics.

Ghana put on a thrilling display against Germany in a match that finished 2-2. Miroslav Klose equaled fat Ronaldo’s record at the World Cup by scoring his 15th goal at the tournament. Fat Ronaldo sent his warm congratulations to Klose after the match by simply saying ‘can you please stop calling me fat Ronaldo. It’s really quite hurtful, thanks everyone!’

Nigeria defeated Bosnia 1-0 meaning the Bosnians are now out of the competition. Every commentator has resisted the urge to use pointless cliches and inanely racist descriptions of African teams in the tournament so far but many were pushed to breaking point as in the build up to Nigeria’s goal Emmanuel Emenike rode the challenge of the Bosnian defender with all the finesse and grace of a wild gazelle.

Regular Ronaldo is still a doubt for tonight’s match between the USA and Ronaldo. Portugal have confirmed they will simply not attend the game if the Madrid Maestro is unable to play.

WWN cannot confirm reports that Sepp Blatter has begun tunneling underneath the Brazilian Central Bank in an attempt to steal the country’s cash reserves.

Belgium play Russia in the early kick off today meaning there is only a few hours left for football fans and the media alike to explain how they really feel the Belgians are the dark horses of the tournament for the 1,356th time this week.