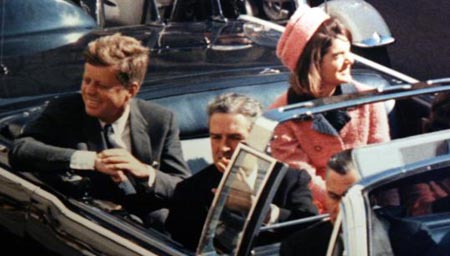 The CIA stated that graphic testimony given by Jackie Kennedy showed beyond reasonable doubt that her husband orchestrated a mock assassination before taking his own life with a concealed revolver he had hidden in the open top limo.

This vital piece of information was accidentally excluded from the Warren Commission report and has not been published before.

“We forgot about it really,” revealed CIA director John O’ Brennan today. “An agent only found the written testimony last week when he was cleaning out some classified files. To say we are embarrassed is an understatement”

In the document, the president’s wife allegedly wrote that her husband had become increasingly depressed the week before the ‘suicide’ and told her he already decided that he was going to take his own life in view of the entire nation: ‘John said he wanted it to look like he had been murdered, so as not to shame the Kennedy family. He was a devote Catholic, but believed he had no other way out of his depression, only death.’

It is believed that Mr Kennedy paid Lee Harvey Oswald to become a Patsy, and had pre-arranged for him to escape custody following his arrest.

“Lee and John were old golf buddies and conspired the whole suicide plot together.’ said Ms. Kennedy in the written statement. ‘Unfortunately, not everything went according to plan.”

Oswald was later killed by Jack Ruby just after being arrested and questioned by police.

“Little did John know, but Jack was dyslexic and read a written order to ‘Free Oswald after I die’ as ‘Kill that motherfucking Oswald motherfucker”.

The CIA apologised for not bringing the new information forward sooner, stating that they were busy fending off extra-terrestrials for the past 50 years.