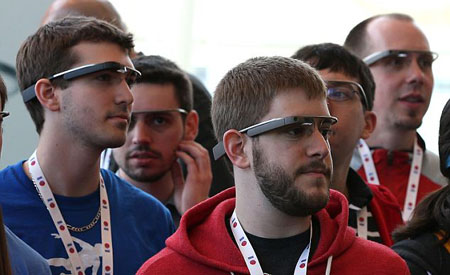 Unfortunately for millions of males across the globe, Google has now prohibited any such content from its flashy new device.

‘Tits & Glass,’ aptly named by makers of the headmounted pornography, MiKandi, managed to be downloaded from the developer’s website by 17 Google Glass owners on its début day, while the site was visited by some 10,000 people.

“The dip in Google glass sales may be just a coincidence.” said CEO Larry Page at a press conference today. “We hope the device sells on its capabilities alone, and not its convenience for pornography.”

His comments came just before several loud sniggers from the awaiting press.

Experts believe the decision to ban one of the biggest markets on the internet may be product suicide, and expect other companies to take up where Google ‘came off’.