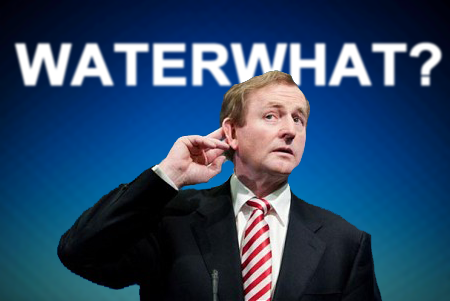 TAOISEACH Enda Kenny today insisted that the Government will stop at nothing to do nothing for Waterford.

The oldest city in Ireland came under increasing focus as the Government prepares to implement an emergency plan to do absolutely nothing about the Deise’s high unemployment rate and its proposed downgrading to a level 3 ghost town.

Mr Kenny told WWN that their plan was working, pointing to recent news that Aer Arann will cease operating from the counties main airport from early January.

He said that he also expects all public transport – including Bus Eireann and Irish Rail – to pull out of Waterford city and county by 2014.

Tanaiste Eamon Gilmore said that he had full confidence in the governments strategy and urged the Waterford people to continue mirroring the ‘do nothing’ part of the plan.

“Protesting will be futile as we have no intention of promoting any business down there in the near future.” he said. “In fact, the best thing would be to just keep claiming your social welfare benefits while the offices are still in operation down there.”

The Labour leader promised that he will work closely with ‘more important Irish cities’ like Dublin, Cork and Galway in the future, and added that he will do everything in his power to centralise job creation in these main areas.

Meanwhile minister for the environment Phil Hogan passed a €54bn motion in the Dáil earlier to redirect the river Suir to Kilkenny city from an access point out-side Clonmel town. This comes part of a wider scheme to promote fishing tourism to his constituency.

This motion is set to pass the preliminary stage later today.