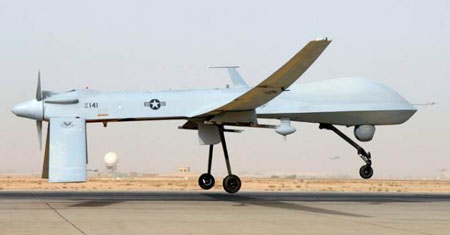 A TEARFUL United States attack drone stationed in Afghanistan said it was ‘elated’ today over the news of president Obama’s re-election victory.

S-3476 said it stayed up all night to watch the live coverage of the ‘nail-biting’ voting count and expressed deep emotion throughout the event.

“Me and the guys were all glued to a small TV screen in the hanger clutching each others wings in anticipation.” said the $4 million unmanned aerial vehicle. “When the results finally came in we all hummed silently for several minutes. It was quite an emotional scene.”

Minutes after it was projected Obama would return to the White House for a second term, the two-year-old aircraft posted a  jovial response on Twitter: ‘We’re going home to our families very soon. HOOO RAAAA. Go Obama!!!’

It is expected that S-3476 and its fellow fleet of 500 drones are to withdraw from Afghanistan in the latter part of 2014 under the re-elected Obama administration.

In a wide-ranging victory speech, president Obama praised America’s attack drones in Afghanistan as the “best in the world” and pledged to bring his toys home safely over the next 24 months.

He said: “Without the hard work and attention to job detail of our $11 billion drone programme – I would not be standing here today giving this victory speech.

“Tonight, in this election, you, the brave American attack drones, reminded us that while our road has been somewhat violent and totally absurd, we have like totally outdone ourselves in the world of technological military hardware, and we know in our hearts that for the United States of America, the best is yet to come.”