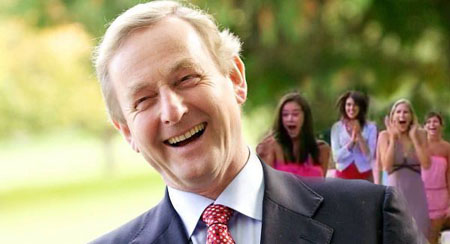 THOUSANDS of Waterford residents are expected to line the city streets to celebrate Taoiseach Enda Kenny’s ‘European of The Year’ tomorrow in John Roberts square.

Over three thousand people have already accepted a request to join the festivities, which will begin in Ballybricken at twelve noon and make its way to the city centre for a two hour party in honour of our leader.

Last month, a German Magazine Publishers Association decided to award its annual European of the Year gong to Mr.Kenny and his PR team for their hard work and dedication over the last year.

“None of this would have been possible without my  team of highly paid advisor’s and spin doctors.” said the emotional 61-year-old.

Organisers for the ‘South East take a stand for Mr.Kenny’ rally are expecting over 5,000 revellers to attend, and promise a great day out for all the family.

“”I suppose this will be an opportunity for everyone to hold their heads up high and be proud of our government for what they have done for Waterford and similar towns across the country.” said chairwoman for the event Audrey Gilligan. “We urge as many people as possible to turn up tomorrow and celebrate our great leaders stunning achievement.”

Mr. Kenny is expected to arrive into Waterford airport on an Aer Arran flight at 11am. He will then make his way to Ardkeen hospital for a quick check up before making his way to Ballybricken band stand for a few cans with the locals.

The ticker tape parade is expected to start at midday. John Mullane will lead the procession down to the quay and onto red square with the smiling Taoiseach on his shoulders.

“How else will we keep the screaming girls away.” joked the Waterford hurler.