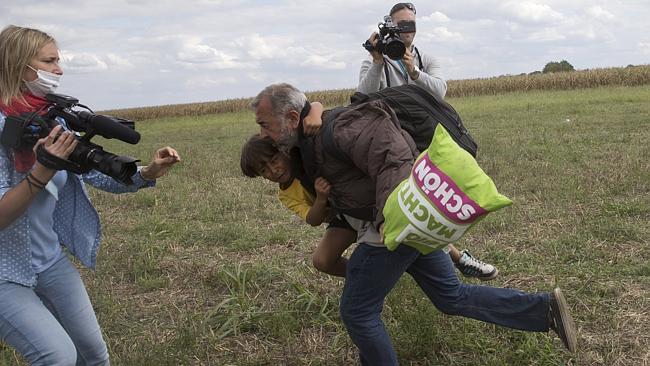 A HUNGARIAN camera woman who was fired for deliberately tripping up a Syrian refugee carrying a child as they ran away from police near the Serbian border has been hired by Sky News today for her efforts.

Petra Laszlo, working for local TV station N1TV, which is run by the anti-immigration far-right Jobbik party, was caught on camera kicking refugees, including a young girl, as they were fleeing a camp.

“I got the call from the head of Sky News at about 7am this morning,” Ms. Laszlo confirmed. “They said I was exactly what they were looking for; ‘the new Kay Burley’. I’m absolutely delighted to be part of the team and hope to be back out on the field very soon.”

Sky News, who have a long history of hiring sociopaths masquerading as journalists and technicians, welcomed the young camerwoman to the 24-hour-news station, stating that she will “fit right in” at their headquarters in London.

“We not only need people to report the news: we need them to be the news,” said the Chief Executive of Sky Jeremy Darroch. “Petra has proven herself worthy of such a position and we look forward to more of her antics going forward,” adding “The fact she also wore a face mask in case she contracted any migrant diseases really sealed the deal for me”.