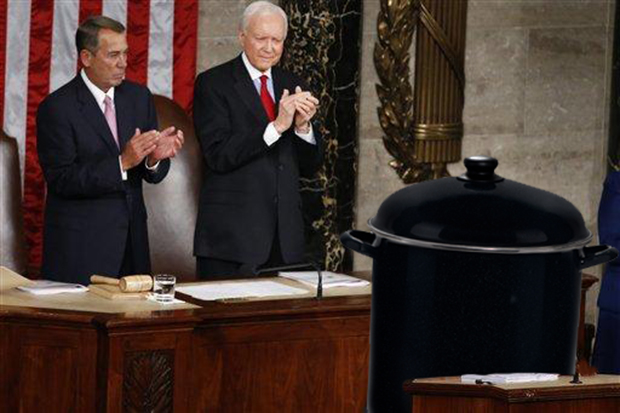 AN uncontrollable Pot last night accused the United States and its allies of ignorance, claiming the ongoing refusal to acknowledge that the Kettle is black, could catapult the world into a “steam-ridden nightmare”.

In a speech to US Congress punctuated by numerous standing ovations, mostly from Republicans, the Pot depicted the kettle as a “threat to the entire kitchen”.

Ciphering through pages of ladle-written notes, Pot warned the United States that future dealings with the black water boiler could eventually backfire, pointing out the Kettle could overheat and explode, sending dangerously hot steam everywhere.

In the highly anticipated speech, Pot said: “Kettle has been boiling over way too long for my liking and could potentially wipe out the rest of us.”

In its response, the Kettle denounced Pot’s 39-minute speech as “boring and hypocritical,” stating that the pot was also black and could boil over just as easily.

Pot insisted that he was not trying to meddle in internal US politics, but just wanted to point out how black the Kettle was.

Following the speech, US President Barack Obama told WWN he had seen it all before in the speech transcript.

“As far as I can see: we are all black,” he said. “Colour should not be the issue. Our job as a nation is to turn the heat down on the stove – on both sides of the cooker. And not leave everyone in hot water.”

Pot later replied by saying it wasn’t happy being the same temperature as the Kettle, as it believed it was better and more important to the United States than any other kitchen utensil.