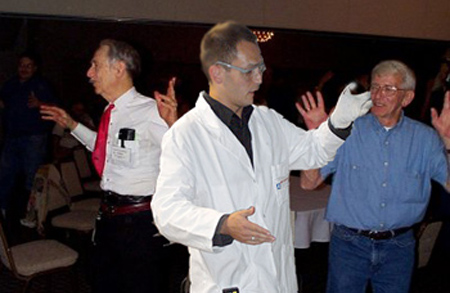 SCIENTISTS in Trinity College Dublin have concluded yesterday that ‘The Hokey Pokey’ is actually what its all about, after discovering a Mathematical equation to prove so.

Commercial organisations and education Institutes are likely to market the new idea and its formula within the next few years. But the scientists behind the research warn that there should be a public debate on the ethical implications behind such a ground-breaking development.

A trinity college spokesman said today that they are still in the ‘early stages’ of the discovery and have yet ‘a long way to go yet before cracking the Hokey Pokeys full potential’.

Professor John Clapton explained the method in a press conference today: “It wasn’t until we extended, and kept, the right hand out, we realised we could shake it all about. We then found, after several more tests,  that we cracked the hokey Pokey by turning ourselves around, and that’s what it was all about.

Consequently, the results of the Trinity college findings. could soon be confirmed and expanded to the ‘right leg in’ and the ‘right leg out’, forming the basis for a new or amended quantum Hokey Pokey theory were all limbs can be shaken all about.