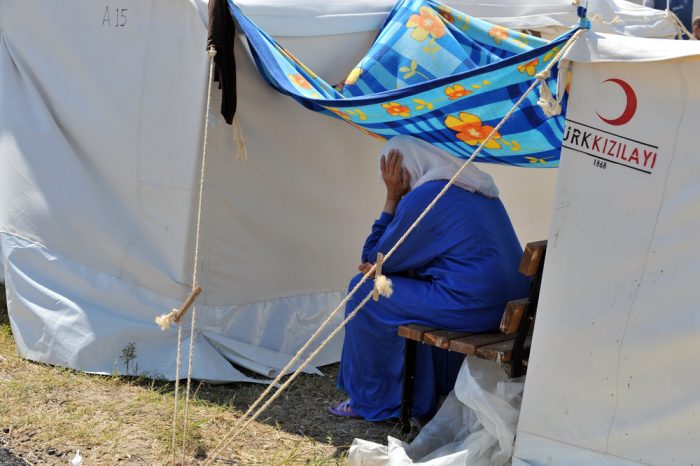 THERE may be times when you see an attractive woman that you’d like to take on a date, but you stop yourself from talking to her because she seems busy.

Maybe she’s listening to something on her headphones on the train, maybe she’s fleeing a brutally oppressive regime; hey, we’re here to tell you that if you speak with confidence and authority, that chick will be putty in your hands. You just have to believe in yourself, and follow these steps and that sexy refugee will be sipping cocktails with you in no time…

As she desperately tries to bargain with border guards while dragging everything she owns behind her in a heavy bag, stand somewhere directly in her eyeline and make a “come here” motion. Women, no matter how terrified they are, cannot resist the idea that a man has something to say to her. She’ll immediately wander over to see what you want. If she doesn’t, just beckon to her again, only this time do it more assertively. Women love men who can’t take no for an answer.

Although she was just minutes away from clambering onto a rickety boat with 300 other desperate souls, if your opening line is strong, she’ll put everything on hold. Compliment her on how good she looks despite the fact that everything she owns was flattened in an airstrike two days early. Tell her a joke. Acknowledge the awkwardness of the situation, and assure her that you don’t normally chat up strange women, but you had to make an exception for her (even if this is a lie LOL).

When a woman is fleeing from her home country, what she really wants is safety and reassurance that she’s not going to be raped or killed in the next 24 hours. As long as you can assure her that you won’t rape or kill her in the next day, then there’s a very good chance you’ll secure a date there and then. If you can state with confidence that you can smuggle her across the border into mainland Europe, all the better. Add some humour to the proceedings. “It’ll be plain sailing with me, baby”, she’ll love that.

4) Don’t let her ignore you

At times you may find that her attention drifts away from you, and focuses on the remaining members of her family as they are driven back from the border by baton-wielding guards. Always make sure that you have her full attention. If you let her go now, then chances are you won’t be able to get her back to the zone of conversation you were in, due to her having made it across the border or having been killed in a stampede.