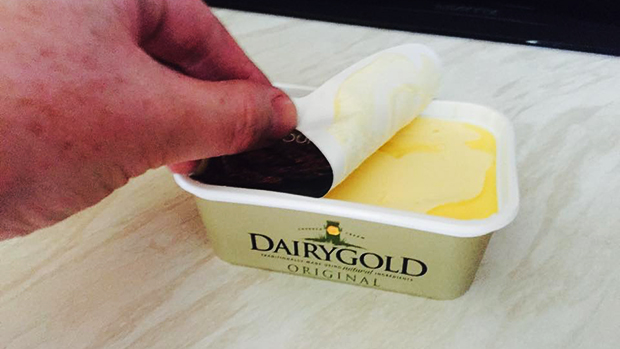 A STARTLING new study has found that a large majority of people who leave the foil on spreadable butter tubs are actually complete psychopaths and shouldn’t be trusted.

The study, carried out by researchers from Harvard University in the United States of America, said people who refuse to just take the foil off despite the tub already having a lid to keep it fresh, should be admitted to the nearest psychotherapist for an assessment, before they do something dangerous to themselves or others.

“These people are completely dangerous and proper precautions should be taken when dealing with them on a daily basis,” the report warned. “Other telltale signs include: resting their free hand palm up on their lap while eating, insisting on putting ketchup in the fridge, and a propensity for eating Marmite, Ritz biscuits or pigs feet (trotters).”

Of the 93% of people who insisted on leaving the foil on the butter tubs, researchers found many had severe abandonment issues and were also prone to random acts of violence.

“For instance, during one test we put two subjects in a house for a week with one tub of butter. One subject immediately ripped off the foil when using it,” lead researcher Dr. Timothy Jeffries explained. “When the other subject found the tub had no foil, he refrained from using it and began resenting his housemate over time.

“Things escalated quite quickly and the foil lover ended up stabbing the other man to within an inch of his life. As it happens, we found this across the board and lost 17 people to violent deaths during our study.”

If you are concerned about any of the issues raised in this article, please contact your local psychiatrist for an evaluation.