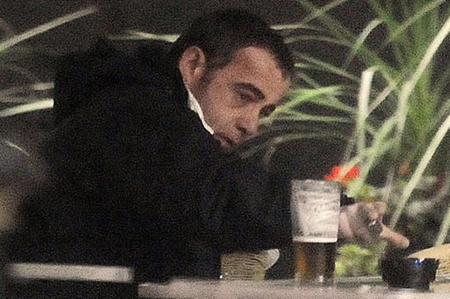 The 48-year-old actor was hunched up around a pint of Carlsberg this morning in a Manchester bar, where he is recovering from last night.

“Was I talking to you last night?” he asked, while peering under his hand which was keeping his forehead warm.

“Ah man, who was that chick I was with, she couldn’t have been more than……”

Mr. Le Vell then made a dash for the bar restroom, but not before knocking over several bar-stools on the way.

The great grand son of eight, from Hale, Cheshire, who has been in the ITV soap for 30 years, faced 12 charges in all – five counts of rape, three of indecent assault, two counts of sexual activity with a child and two of causing a child to engage in sexual activity.

He was found not guilty of all charges by the court, before heading out on the piss for the night.