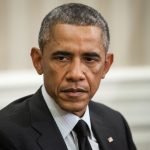 OUTGOING US President Barack Obama is reportedly considering using his 3rd and final secret assassination on likely Republican presidential nominee Donald Trump, WWN can exclusively reveal. As the prospect of a Trump presidency looks more and more like becoming a reality, it is believed Obama has begun deliberating using a secret assassination, given to all… Read more » REPUBLICAN presidential nominee frontrunner Donald Trump has admitted that he wakes up every morning soaked in sweat at the thoughts of the American public finally calling him on his negative points, any one of which could see his bid for the White House come tumbling down. Instead, Trump continues to rack up support in key… Read more » AMERICAN presidential hopeful Donald Trump has admitted to drawing on the measured and reasoned writings of Adolf Hilter’s manifesto Mein Kampf in an effort to find a solution to the ‘Muslim problem’. Speaking at a Republican rally, Trump endorsed proposals such as collating a database on US citizens who happen to be Muslim, and perhaps… Read more »