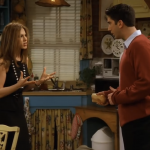 THE STRASBOURG court confirmed that Ross Gellar and Rachel Green were not together when Mr. Gellar slept with the ‘photocopy girl from the Xerox place’. The European Court of Human Rights final verdict, made public this afternoon, is not eligible for appeal and sees Mr. Gellar acquitted in relation to his alleged infidelity when “on… Read more » PLANNING a wedding? Forget flowers, cakes and cocktail sausages, what you need to sort out promptly is whether or not your bride-to-be intends to take your name after you’re married. If she is, then congrats, buddy. We wish you a lifetime of happiness. If not… you may want to consider your options… 1) Call off… Read more » ALL across Ireland, groups of friends are suffering needlessly through their acquaintance with insufferable couples who post their every move on Facebook and Instagram as if they’re some form of ‘power couple’. To this, we say suffer no more! The phenomenon of the ‘Power Couple’ has grown in recent years, from genuinely powerful and successful celebrity… Read more » LONG SUFFERING girlfriend Andrea Hines is having her patience sorely tested this evening by her boyfriend Ciaran Connell, WWN can reveal. Ciaran’s habit of uttering the phrase ‘yeah, be ready in five minutes’ is putting the couple at risk of starting their weekend off with an argument as Hines fears a repeat of a recent… Read more » REPORTS coming into WWN’s sister site Gash are speculating on the relative attractiveness of James now that another woman has deemed him worth the effort and has begun a relationship with him. The phenomenon of men previously discounted suddenly becoming attractive when someone else takes an interest has been debated for decades but James’ recent… Read more »

ONE LOCAL WATERFORD boyfriend has vowed he will never cheat again after he was caught being unfaithful, copper fastening his ironclad half-apology by stating ‘I definitely won’t cheat again, promise’ WWN can reveal. Cormac Naffin, still current boyfriend to Ashling Mongan despite everything that has gone on, has confirmed now on at least 53 separate… Read more » WITH thousands of couples across Ireland in long-distance relationships due to work or college requirements, “how do you keep your sex life alive” is the question that most relationship experts get asked. Well, one Waterford couples counsellor may have stumbled upon a solution to the problem; simply ride everything you can while your partner is away…. Read more » THERE IS A point in every relationship when a single, seemingly insignificant moment can prove itself to be the very instance in which your boyfriend/guy you’re sort of seeing/your fuck buddy/sex friend/intercourse penpal/boning acquaintance showed beyond all reasonable doubt he is ready to commit and ‘put a label on it’. WWN, using the latest romantic… Read more » THE ADVENT of the smart phone has seen couples finding it harder to keep their partners happy without it requiring actual eye contact and words but that sadly means you’d have to look up from that hilarious compilation of people falling over. Keep the spark alive without having to turn your head away from that… Read more » IN A BEWILDERING act that defies all basic logic one Waterford friend thinks her boyfriend would somehow be cool enough to be best friends with your boyfriend. Kayla O’Brien (26), who started seeing her boyfriend Ian only a few months ago is under the false impression he’s as ‘gas’, ‘funny’, ‘cool’ and ‘sound’ as your… Read more »