LOS ANGELES police have fatally shot businessman Uncle Ben this morning after a routine traffic stop went wrong, prompting dozens of people to protest at the site of the killing, according reports from the US. The 98-year-old billionaire was said to be driving an orange 2012 Lamborghini Diablo erratically before being stopped by a highway… Read more » 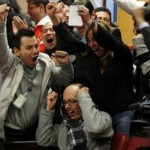 AFTER a rather slow news week across the board, the world’s media gathered as one this afternoon to welcome the latest news tragedy to fill our papers and screens. Editors and sub-editors raced to allocate potential story ideas for thousands of hungry journalists, who had all but lost faith in the unpredictability of the world… Read more » GOD ALMIGHTY has admitted, for the first time ever, that he is giving serious consideration to switching faiths to Islam. Long thought to be infallible and omnipotent, God has stated in his tri-millennial address to his Christian followers that he has weighed up his options and thinks it is time for a change. “I’m known… Read more » THE OBAMA family were said to be ‘in good form’ in the White House yesterday evening after news of the administration’s 2,500th civilian kill was announced after yet another drone bombing raid in Somalia. In a modest dinner ceremony hosted by the first lady, Barack and his two daughters, Malia and Sasha Obama held hands… Read more » AN ABSOLUTE fucking lunatic has won an election today in Israel, keeping him in the role as Prime Minister of the middle-eastern country. Benjamin Netanyahu, who ordered the bombings of thousands of innocent men, women and children since taking office, secured victory in the Israeli election after a last-minute push to shore up his party’s… Read more » THE Kremlin has confirmed that Russian President Vladimir Putin was found safe and well down back of one of the many couches in the government palace. Mr. Putin was believed to have fallen into a crevasse 11 days ago after sitting down to have a rest. A large scale search was launched after the president… Read more » BRITISH tabloid The Daily Mail and its online publication The Daily Mail Online has announced it will be changing its name from next week. The newspaper’s editor Paul Dacre explained the new changes at a London press conference this morning. “The Daily Mail will now change its name to The Daily ISIS as part of… Read more » PRESIDENT of the United States, Barack Obama is today preparing himself for the arrival of Enda Kenny for St. Patrick’s Day celebrations, and is said to be dreading the arrival of ‘that Irish prick’. Mr. Obama has met An Taoiseach on several occasions, where the two were found to have nothing in common and nothing… Read more » ISIS have shocked the world once more as footage of the terrorist group destroying ancient and priceless art has emerged. The latest videos have left everyone questioning what sort of other horrors a group that doesn’t value art could perpetrate on the world if given half a chance. Footage circulated on social media and then… Read more » AUTHORITIES investigating the suspicious death of an Irish Setter at Crufts today have revealed the dog was last spotted at the venue’s bar in an ‘inebriated state’, and have asked revellers to come forward with any information they may have regarding the animals final moments. Its owner claims the dog, who was celebrating coming second… Read more »