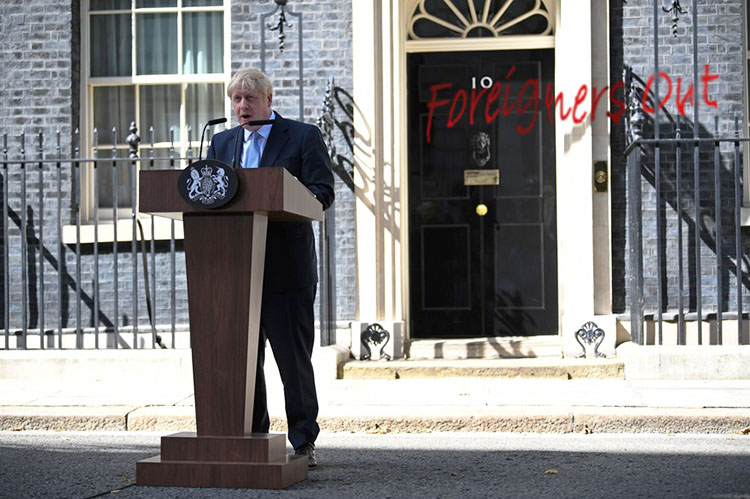 HERALDED by the British media as something rivaling Banksy, and that asked ‘fair and genuine questions’, newly emboldened Tory leader and PM Boris Johnson has spray painted ‘Foreigners Out’ on a wall to rapturous applause.

“Let’s get racism, inequality and absolutely fucking the poor ‘done’,” Johnson said to cheers, repeating a version of his incredibly detailed election manifesto of ‘Let’s Get Brexit Done’.

Johnson’s speech had all the hallmarks of a man who felt free, finally, be himself; abandoning his cute and cuddly election campaigning persona of a charming, doddery and harmless lying racist, the former London mayor relaxed into the far more comfortable persona of not having to expertly hide who he was from the British public.

“When I’m finished Britain will resemble the utopia found in the great Dante’s The Divine Comedy, specifically the 5th circle of hell,” Johnson shared, dropping his trademark relatable quip understood by everyone.

“Should ‘Paki Bastards’ be in all capitals do you think,” Johnson asked his trusted advisor Dominic Cummings as he excitedly shook a can of spray paint, the ball pinging frantically within the can.

“Muslims is spelled m-o-s-l-u-m-s, right? Johnson asked as a crowd of supporters who insisted they didn’t care how it was spelled as long as only whites were allowed in the country.

An engrossing watch as always ‘Britain’ remains the must avoid horror movie this Friday the 13th for the nation’s minorities, poor and/or vulnerable with the latest developments being referred to by political commentator’s in the media as ‘a bang average, run of the mill election with a result that requires no self-reflection on our part. This is all very normal’.

Elsewhere, as punishment for his failure to galvanise voters or form a cogent Brexit position Labour leader Jeremy Corbyn has been exiled to Siberia, meaning British politics will be robbed of his electrifying and charismatic presence.