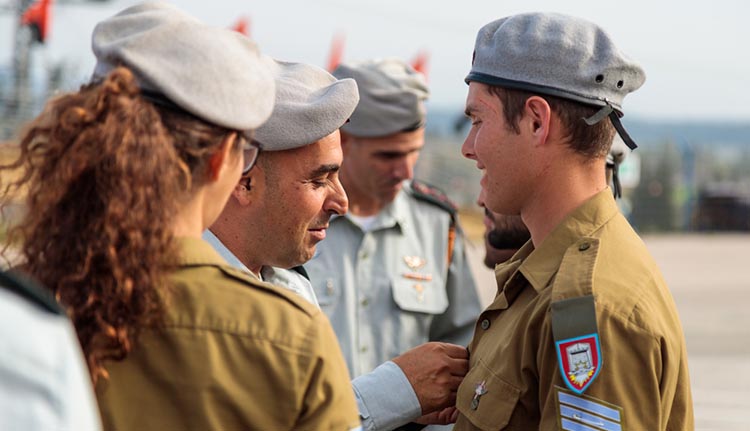 JUST days after being struck down by a pebble launched from a terrorist 12-year-old Palestinian’s catapult, inspirational IDF soldier and Israeli man, Adam Damkani, was awarded the medal for bravery.

Injured in a series of clashes at the Israeli border, which is somehow situated in the heart of Palestine, the fallen 23-year-old soldier was rushed to hospital in the hopes of not needing a stitch, where a team of medical experts helped dress his injuries with a band aid.

“When we saw the scratch on his head we just had to act immediately,” Israeli red cross member Jacob Alterman recalled, “he was visibly upset and was crying profusely, asking for his family members.

“We were all a little taken aback at the level of his injury. He even flinched when we tried to clean the abrasion with a cotton bud. Hopefully it won’t leave a scar”.

In the tense minutes it took to close the wound, the grandson of four told WWN exactly what he was going through his head at the time.

“You think it won’t ever happen to you,” the now recovered Damkani told us from a Jerusalem intensive care unit, “one minute you’re blowing kids kneecaps out with a 50 cal sniper rifle, and the next you’re hit with a pebble the size of a large pea. I was lucky my eye was covered by the sniper scope or I would have certainly lost the use of it if it hit me.

“The scratch still stings when I touch it and it is all dried up now and a bit scabby, so I could be out of action for a while”.

Despite his extensive injuries, Damkani somehow managed to make it to today’s ceremony where he received his medal for bravery.

“I don’t normally like to make a fuss about these kind of things, it’s all part of the job, but this was a close call and I thank everyone that helped save my life,” the hero concluded.

The IDF soldier was also treated for “trigger finger cramp” and is expected to make a full recovery.