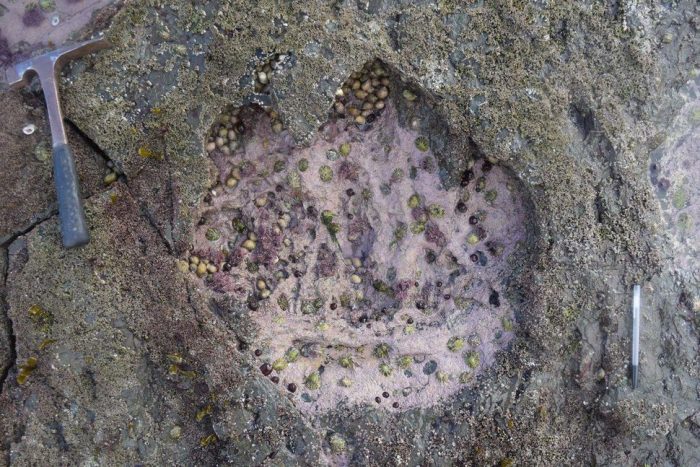 FOOTPRINT evidence on Scotland’s Isle of Skye confirming that dinosaurs roamed there some 170 million years ago has revealed the reptiles would have been very hard to understand, given their thick Scottish accents.

“Rapid fire phrases delivered with a mix of smiling geniality and a maddened glare that hinted they intended to do you harm, these dinosaurs were as Scottish as it gets,” confirmed one dinosaurologist Peter Mayview, who insisted he was a Paleontologist.

“These dinosaurs would have greeted strangers with a polite ‘aye’ before remarking on the weather, their ‘wayins’ and to be honest you wouldn’t have understood much else, their accent so mangled they might as well have been the aural embodiment of the enigma code,” Mayview added as he dusted the area around a number of really, really, really old footprints.

The footprints belong to sauropods, which at two metres tall must have subsisted solely on a diet of Irn Bru laced with Buckfast and were the older cousins of the tyrannosaurus rex.

“The muddy and shallow lagoon these prints were found in is just the sort of miserable and dank conditions Scottish dinosaurs would have loved to dwell in. Despite it being 170 million years ago, there’s every evidence our jurassic bretheren similarly enjoyed being miserable,” Mayview concluded.