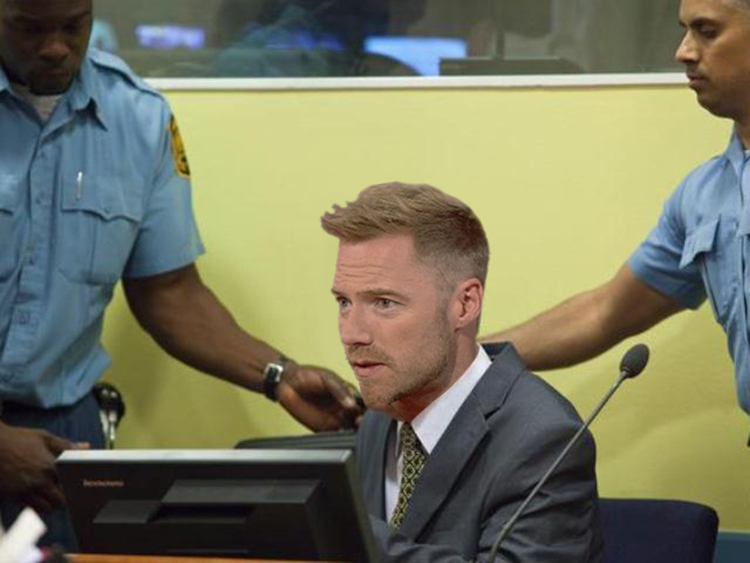 FORMER Boyzone General Ronan Keating was in defiant mood this morning as he arrived at The Hague to face charges of crimes against humanity surrounding his year 2000 butchering of The Pogues’ classic Christmas hit, Fairytale of New York.

The vicious assault launched on the ears of festive music fans was short-lived, but the damage done that year can still be felt almost 17 years later, with Spotify playlists and Apple Music searches sometimes throwing up the Keating version instead of the original.

Keating, speaking through an interpreter who speaks fluent shhhh, remained emotionless in the dock as the charges were read against him, confident that if they didn’t nail him for ‘When You Say Nothing At All’, they’d never convict him for this.

“We will find today, with the evidence available to us, that Mr. Keating did purposefully and deliberately record and distribute a horrendous version of Fairytale Of New York onto an unsuspecting public,” read the statement from the prosecution.

“This was a senseless, cruel attack on people, at Christmas time no less. There are children who heard the Ronan Keating version before any other, and are still dealing with their feelings about it today. Mr. Keating, you have shown no remorse for your actions up to this point, and it is the duty of this court to ensure that humanity finally receives the justice it deserves”.

Meanwhile, original Fairytale singer Shane McGowan has testified that the Keating version is what turned him to a life of alcoholism, having never touched a drop before he heard it.