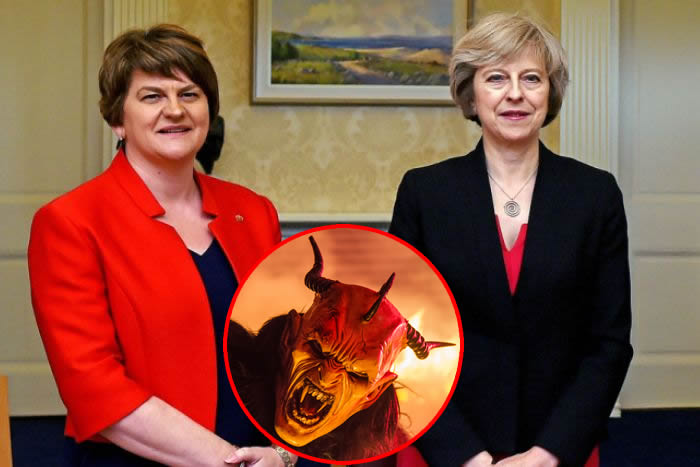 BRITISH PM THERESA May is set to confirm to the Queen that she has struck a deal with Northern Ireland’s DUP party, following the sad news Satan pulled his support for the Conservatives after having ‘second thoughts’, WWN can confirm.

It is believed May, driven by a strong and stable desire to cling to power in an act of naked self-preservation, no matter the consequences for the British public, struck a deal with a party known for its misogynist and bigoted views.

“Don’t forget they hate science and seem happy enough not to condemn terror groups like the UDA/UVF,” Satan explained to WWN, speaking exclusively from the fiery pits of hell.

“Look, we all have to draw the line somewhere, I was looking forward to helping Theresa carve out the worst possible vision for Britain with policies that would punish the most vulnerable in society, but fuck me, have you seen the DUP? That was my call to exit stage left,” added the fallen angel.

Hailed as a triumphant political masterstroke by leading Tory idiots; enlisting the help of the DUP party, made up of level headed politicians with a similar number of ongoing scandals and corruption allegations as the Tories, is seen as great start to moving Britain forward.

“We had considerable bother finding the ruddy place on the map, but turns out it’s just left up by Scotland and across the sea,” confirmed a Tory spokesperson, outlining the location of Northern Ireland.

“Having a bunch of lunatics constantly threatening to the pull the plug on this government as we negotiate with the EU, I can’t think of a better way to govern, can you?” added the spokesperson.

The first part of the proposed deal between the two parties will see the DUP receive a shipment of over 300,000 miniature Union Jack flags.