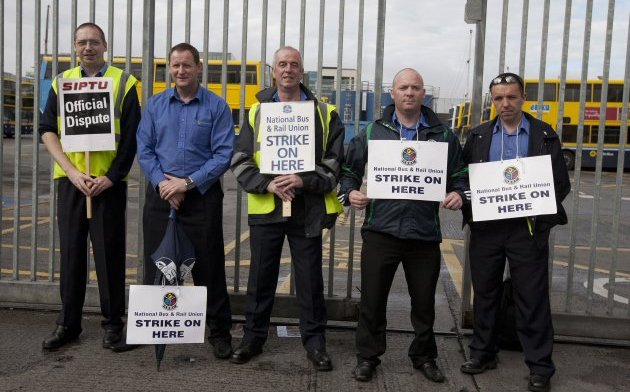 AFTER the successful recovery of the Irish economy, highlighted extensively by the Labour-Fine Gael coalition over the last 24 months, the entire population is set to go on strike in a bid for better pay.

“I’m not doing another tap until I get 70% added to my basic, and we’ll be talking about a company car and bonuses too. The boss hasn’t a leg to stand on if he tells me he doesn’t have the money, I watch the news like, the recovery is a scientific fact,” confirmed employee at a local Centra, Thomas Dwyer.

Dwyer is just one of 4.5 million people who have downed tools after realising that since the economy is bulletproof and shows no time of slowing at any point in the next 100 years, now might be the time to bargain for better pay.

While the government had set up a ministry for the good times are back in late 2013, it is believed some people may still be unemployed, with others not happy with their current job or pay.

“I could be wrong, but maybe we shouldn’t have pushed this ‘recovery’ bullshit so hard,” caretaker Taoiseach Enda Kenny shared with WWN, “but in fairness the papers picked that up and rammed it down everyone’s throats, it sort of got away from us a bit”.

Following the drawn out industrial dispute involving Luas staff, Dublin Bus staff are now expected to push for similar increases. The drivers join teachers and a number of other professions set to seek better conditions and pay in the coming months.

“I told the PR team ‘the recovery’ needed an asterisk over it that said ‘PS, we’re still broke’, what a mess. It’d almost make me refrain from trying to become Taoiseach again,” confirmed Kenny.