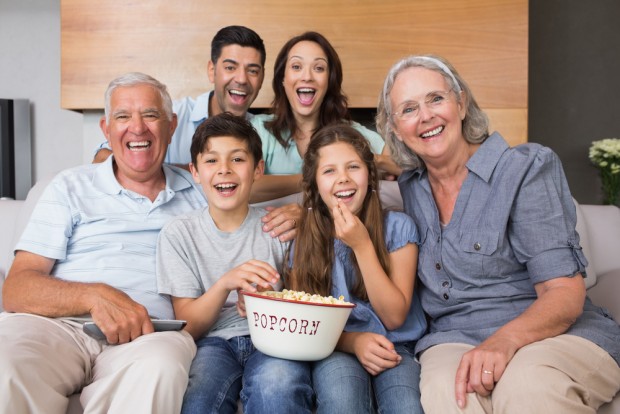 WAR. War never changes. Neither does the horror of watching TV with your parents and then all of a sudden a sex scene appears onscreen out of nowhere. The wave of embarrassment that floods out of the telly and washes all over you, whether you’re 6 or 56.

With even soap operas now seemingly featuring graphic hardcore sex scenes every five minutes, you need an exit strategy at the ready. If you don’t want to be sat with your mam on your left and your dad on your right watching some young one on Love/Hate get lifted out of it, then have the following excuses ready;

Tea. Who wants tea? Anyone? It’s amazing how a powerful need for a hot beverage comes on you whenever a bare pair of breasts appear on your parents TV. Never mind the fact that it could be quarter to eleven at night, you spring up off the sofa at the merest hint of a nipple, and head out to the kitchen until any and all sexual activity is gone from the screen.

The toilet. Two people going at it on the telly is perhaps the best laxative available to someone who watches TV with their parents. The sudden appearance of a swinging mickey has a starters-pistol-like effect on most people, and many have made it from the sofa to the toilet in under five seconds.

See is there anything else on. Even if the movie or TV show you’re watching with your parents is the most gripping, entertaining thing you’ve seen in years, you can spare yourself a world of awkwardness if you reach for the remote when a sex scene comes on. You can even pretend that you’ve got to check something on another channel, or see if you’ve set something to record on the DVR or get sports results on Aertel. Just make sure to mute the sound, as pants and groans of ecstasy ringing over the local GAA scores is still pretty grim.

Throw the telly out the window. Don’t think, just do it. You can think of an excuse later.

Just leave and let your parents enjoy it. They don’t need you to say anything. They don’t need a big drama. They’re probably delighted to see a bit of dirt on the telly. They’re old, they don’t know how to work the internet. Just exit the room and let them get nasty.