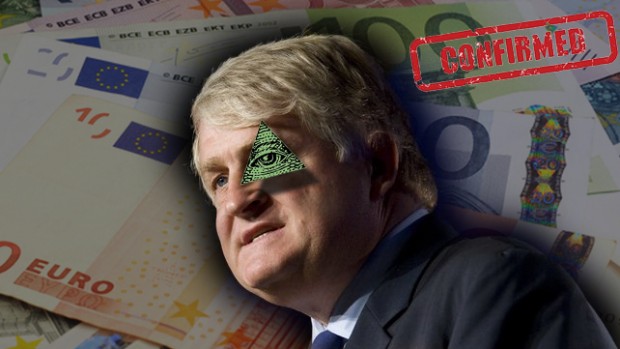 IRISH businessman Denis O’Brien has renewed his longstanding membership with shadowy organisation and real rulers of the world, the Illuminati, WWN can exclusively reveal.

O’Brien, who first joined the collective in the late 90s, is said to have posted his signed membership renewal form this morning using the Illuminati’s graciously provided ‘free postage’ envelope, including a cheque for €12.99, covering the annual membership fee.

“While membership of the organisation is restricted to only the elite few, we do know some details about the Illuminati such as the very reasonable membership fee,” confirmed former conspiracy theorist Noel Quinn, “you can’t call me a conspiracy ‘theorist’ if it’s all fact,” he added.

The membership renewal form is one of the most straightforward forms the businessman will have come across as it simply involves triangular ‘yes/no boxes’ next to the question ‘do you still want to be in the Illuminati?’

Additional membership red tape includes sending a litre of newborns blood and a video of the member shedding his reptilian skin, allowing for the fresh skin to air out.

O’Brien has hit headlines again recently following questions over the Government contract for water metre installation which was awarded to his Siteserv company, but O’Brien will have more pressing issues on his mind.

“There’s a rumoured EGM being called by the Illuminati as their headquarters in the Cayman Islands is the subject of debate. Several members want the hedges on the ground cut to a minimum height of 4 foot ,but others are objecting,” explained conspiracy factist Quinn.

“The member’s bar needs some renovations too, the toilets are constantly clogging, the smell is apparently quite bad,” added Quinn.

The EGM which is believed to be taking place next week will see members vote on these matters as well as on the prospect of influencing the current political climate to bring about a nuclear holocaust which will net Illuminati members $87 trillion.