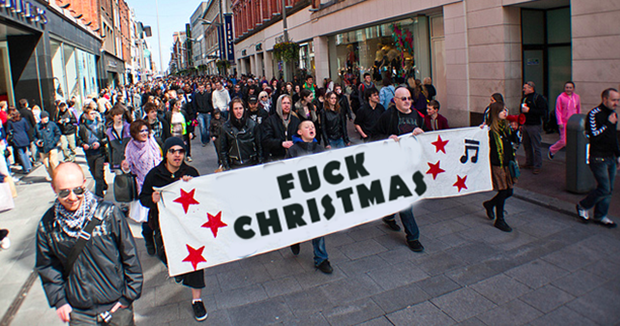 “The idea is pretty simple,” explained head of security at the zone Seamus Clifford, “mention Christmas or wear a stupid Christmas jumper and we’ll box the head off ya and kick you out onto Dame Street or into the Liffey, obviously we’ll give you the choice first, we’re not monsters”.

Stretching from Fishamble Street, Essex Street and Cow’s Lane the modest area size will provide all Dubliners with the option to enjoy a Christmas free zone during the rest of October and all of November.

“I’m just as big a fan of Christmas as anyone but not in October, so we’ve set up some checkpoints around the surrounding streets to prevent any ’12 pubs of Christmas’ groups getting in. We’ve only been operating this Christmas free zone since this morning, but we’ve managed to stop over 4,000 complete arseholes from entering,” explained one of the zone’s organisers Kevin Tallant.

Kevin admits that in the event of some pro- Christmas pressure groups getting their wish and officially bringing the holiday forward, two months so that it stretches over 12 weeks, he will cease his opposition and accept defeat.

“Obviously, if that happens I can’t do anything but I see nothing wrong with, in the meantime, physically assaulting any dickhead who can’t wait until the 1st of December to start all that bullshit,” added Kevin.

Pro-Christmas apologists have come under fire after refusing to condemn a number of retailers after they broke into several creches and schools, tattooing children with the logos of the products available in their stores, in the hope the overwhelming advertising pressure exerted on parents will result in a boost in sales.

Retailers are also said to be looking into technology, which would allow them to sear their Christmas advertising onto people’s retinas.