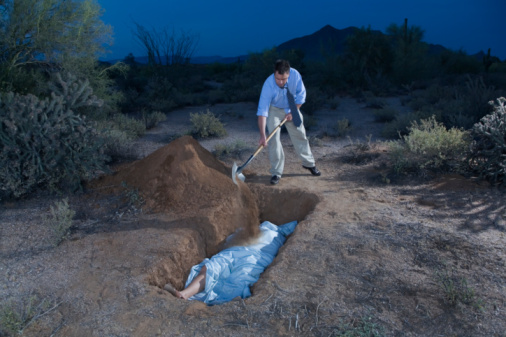 THE rolling hills of the picturesque Wicklow Mountains, with their many streams, lakes and wooded landscapes have come first in a new poll of Ireland’s best places to dump a dead body.

The survey found that the 500 square kilometres labyrinth of peaks and troughs offered the best possible shallow grave opportunities for both seasoned organised-crime hitmen looking for an area to dispose of rival dealers and informants, and first time murderers looking for somewhere to quickly bury an ex-partner in a panic while wracked with guilt and remorse.

“Dublin is fast becoming the murder capital of Ireland, so it makes sense that it’s nearest vast expanse of nothingness would become a popular disposal site for victims” said survey conductor Grainne Malley.

“The Wicklow Mountains with its twisty roads leading to God knows where and soft diggable earth offer the best options to everyone from feuding druglords to a husband who found his wife having an affair. That the range covers such a vast area is especially helpful for making sure that the bodies will never be found, which appeals to everyone. There have been bodies dumped here from as far away as Limerick and Cork”.

The murder tourism trade has helped boost the local economy, with many shops and petrol stations noticing an uptick in business as hungry assassins stop for breakfast on their way home from burying the remains of their victims.

“There’s a lot of nice cafes in the area, and they open early too” said notorious Dublin hitman Ian “the Machine” Greene.

“We normally drop in for scones and tea in the mornings if we’re around here throwing some scumbags corpse into one of the lakes. The people are very friendly and helpful, which just makes these trips all the more pleasant. I actually look forward to getting orders to drop some toerag, just to get up here for the fresh air”.

The amenities and facilities all factored into the voting as did the many picturesque sights and landmarks across the area, which is said to be very helpful when recalling where a particular body may be buried when turning states evidence at a later date.