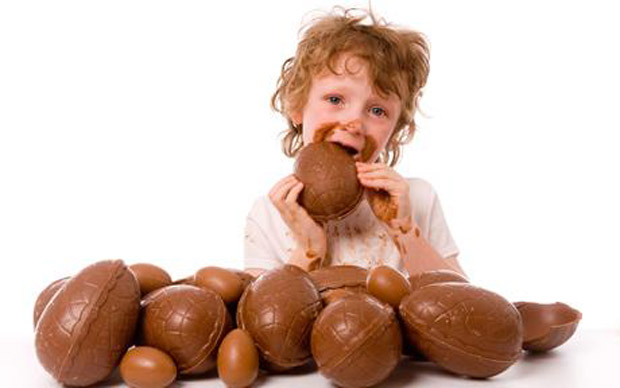 Dara Crowley, a 7-year-old Carlow native, has finally learned the true meaning of Easter after receiving his 10th Easter egg.

“So basically Jesus became a zombie or something and I get a shitload of chocolate?” Dara openly queried as his Granny Joanne arrived with a crunchie Easter egg.

Dara was unclear on the message behind the Easter holidays, until his 10th and final Easter egg arrived at the family home.

“I thought this Jesus lad was pretty sound after last Christmas, but now that I think about it, he like died so I could eat close to 7 kilos of chocolate over a period of 24 hours. What a legend!”

Despite the time honoured chocolate extravaganza proving ever-popular with children some medical professionals are worried that many children are eating too much chocolate, while some in the clergy think the Easter message takes a back seat to chocolate.

“We had a lovely mass last year until one child spoke up and loudly proclaimed ‘I want my fucking chocolate Priest, shut your hole’ I was shocked, because up until then the entirety of the congregation were really digging my zombie Jesus story,” shared Fr. David Johns.

“We in the medical profession deal with a large number of children needing their stomachs pumped every year,” explained Dr. Fintan Power, “the high level of sugar consumed also results in a medical condition known as ‘hyper-to-fuck’ and this causes a great deal of trouble for the Nation’s parents.”

Easter egg related crime is up 23% year-on-year as rogue children continue to steal Easter eggs and sell them on the black market.