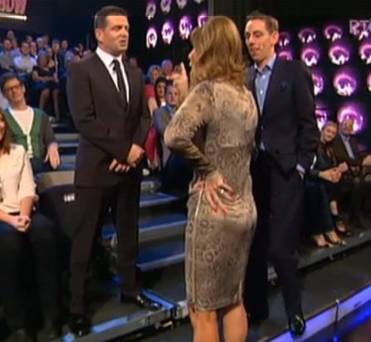 ASLAN guitarist Billy McGuinness said he was ‘very close’ to headbutting Linda Martin after being confronted by the singer during a live broadcast of The Late Late show on RTE1 last night.

The Finglas man, who on the show called for X Factor judge Louis Walsh to stand down from the panel, squared up to the approaching Ms. Martin, and claims he was ‘ready to rumble’.

“All I remember was some fucker in drag coming up throwing shapes at me,” recalled the fifty something year old. “I immediately stood up and covered my crotch, ’cause them fellas are dirty bastards when they gets going. He was lucky the cameras were on, cause I would’ve bet him to a pulp.”

Mr. McGuinness made the comments in a local early house this morning, still unaware he was actually arguing with the well-known female artist.

“Linda Martin!!” he replied when her identity was revealed. “You are not serious? She’s never that tall. What the hell was she wearing?”

Meanwhile, Louis Walsh defended his claims that the Aslan band member was ‘on something’ during last night’s show.

Viewers have since called on RTE to increase the intake of alcohol during future live broadcasts as it was the ‘best Late Late they have seen in years’.