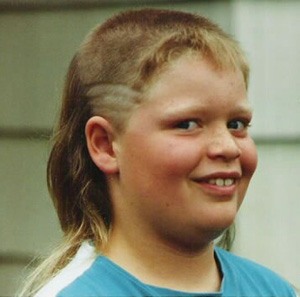 A CORK man has been jailed for 8 years for what a judge described as one of the worst cases of mullet abuse ever dealt with by the Central Criminal Court.

The victim’s mother told the court she had been aware that her son’s hair was being abused by her mullet crazed husband, but was too afraid to do anything about it.

The 32-year-old man originally pleaded guilty on April 26, 2013 to the mullet abuse of his children, but later changed his plea to not guilty by permission of Mr Justice Carney.

However, on June 27th last he admitted 46 sample charges of attempted mulletry and razor assault on his two sons on dates from 2007 to 2011.

It was also reported that he had been cutting the older boys hair for some years before then starting on the younger one.

A friend of the man came to the house on a Monday evening in 2012 and became aware of what was happening and informed the local Gardai. A barring order resulted from this action. Det Sgt Keane said the family had been subjected to a considerable level of physical mullet abuse and that it was decided by the courts to take the two boys into care and give them a proper trim.

The older son, aged 14, told the court that he had grown up believing the world was full of people with mullets who loved country and western music.

“I would go to school in terror. He would sometimes leave a straight fringe on my forehead like he cut it with a ruler. Everyone would laugh at me in class and call me Dork or Billy Ray.” he said.

He told how he would hide a baseball cap in his school bag and put it on when he would leave the house in the morning.

“I’d leave it on all day. The teacher never minded at all. In fact, she told me to wear a cap.” he added.

He remembered going to confession and telling the priest what was happening to himself and his brother. He thought the whole world would cave in on top of him because he had told on his daddy, but the priest did nothing.

Mr Justice Carney said that he would not hold back on sentencing with a crime of such magnitude gave the man 8 years in prison with the last 3 suspended.