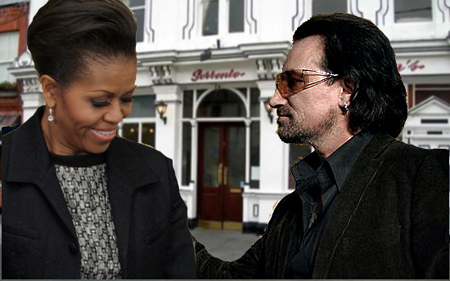 U2 FRONTMAN Bono told Michelle Obama and her two daughters that they wouldn’t be alive today only for himself and fellow humanitarian Bob Geldof’s efforts in Africa.

The American presidents family were invited by the star for some lunch at his favourite haunt – Finnegan’s bar, Dalkey village, Dublin.

Sources in the well known bar and bistro told Waterford Whispers News that Bono had especially ordered in some Plumpy’nut, a peanut-based paste in a plastic wrapper for treatment of severe acute malnutrition,  for the three African women.

“He said he was going to be feeding some Africans, and asked me to order in three pouches of Plumpy nut from GOAL.” said owner of the bar, Pat Finnegan.

It is understood that the 53-year-old singer insisted on feeding Michelle Obamas youngest daughter, Sasha (12), because she looked ‘very weak’.

“Don’t worry, I’m well used to doing this.” Bono was reported to have said while posing for photographers. “I do this all the time in Africa.”

“In fact,  you probably wouldn’t be alive today only for me and Geldof.” he added abruptly.

Local man Pat Heffernan, who was in the pub at the time, said that Bono also offered to feed the first Lady, but she refused.

“Things kinda got awkward. Bono was very pushy about it.” he recalled. “He then pulled this plastic fly out from his pocket and asked the older daughter if she wouldn’t mind sticking it to her forehead.”

However, secret service officials urged the Obama women to leave the premises because they were ‘on a tight schedule’.

The three were then ushered into an awaiting car which sped away very quickly.

Michelle Obama is expected to visit Glendalough later in the day.