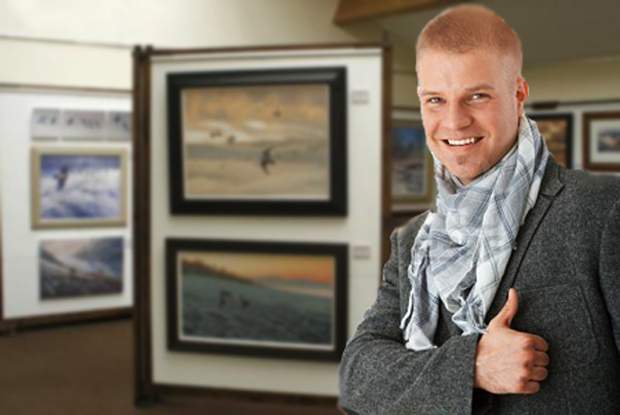 A TRAMORE man said he was ‘fucking deadly looking‘ with his new ‘trendy scarf and jacket’ at an art exhibition in Waterford yesterday evening.

Jimmy Moore, a self confessed stoner, was invited by work colleagues to attend the display in Black friars hall which hosted some of the cities finest art pieces.

“Some cracking birds at it man.” said the 28-year-old.

“I was drinking red wine and all I was.”

“I felt right at home with me new scarf and jacket, everyone was wearin’ scarves and shit and talking bollocks.”

Mr. Moore had previously bought the scarf and jacket in River Island for a staggering €115 the day before the art exhibition.

“I needed to get something special bai!”

Veteran Waterford artist, Maureen Kelly’s, still life pieces were on display for the first time on five years after a devastating car accident crushed her hands.

After 3 years of rehabilitation she finally got partial use of her hands back and started painting again. Her recent works include various mixtures of contempory and still life paintings.

“I remember yer wan with the gimpy hands alright…. and the pictures?: fuck sake, it was like someones nightmare bai! Sure a child could draw better than that.”

The call centre worker told WWN that he secretly attended the exhibition to get closer to a fellow female colleague who had some of her work on display.

“She has some hole on her. Her paintings were alright now. Loadsa colours in ‘em and all. She said I scrubbed up well, so the scarf and jacket thing payed off in the end.”

Mr Moore then concluded that 99% of the people who go to art exhibitions are ‘full of shit’.

“All these clowns do be in work with hoodies and jeans on and then they come out to one of these yolks wearing scarves and jackets. Holding glasses of wine and pretending to like it while spouting shit about stuff they have no clue about.”

“Whats that about like?” he added.  “Anyway, who gives a flyin’ shite, as long as I get me hole off this wan I’ll be grand.”